Recently, I booked a cheap Qatar Airways business/first fare to USA. It was quite an attractive fare – almost for the same price as economy I could fly to Nashville, TN in Qatar Airways business class and then connecting to American Airlines first class from Dallas to Nashville. The only caveat was that the trip started in Casablanca and I had to get there from the Netherlands. Given the flight timings, and lack of early morning connections from the Netherlands to Casablanca, I decided to spend 2 nights in Casablanca – 1 at the start of the trip and the other at the end.

My flight from Brussels (via Madrid) was arriving around 8pm and I did not wanted to go to the city that late. Thus I decided to book the airport hotel. If any of you are in transit through Casablanca, you would know that usually there are only 2 options available – Relax hotel and Sky Atlas. In fact both of these hotels are sister properties – and share the building, gardens, pools, etc. 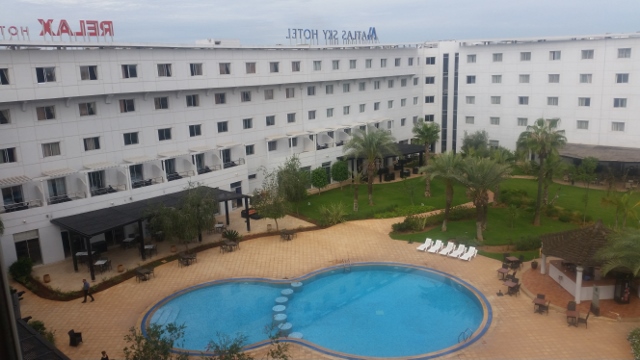 It took a long time for me to get out of airport due to delays in immigration processing. This is the time when all the Royal Maroc European flights arrive and the immigration queue was quite long. By the time I got out of the airport it was around 9.30pm. I went and looked for the shuttle. There was a board for the shuttle I found as described in front of the terminal 2. 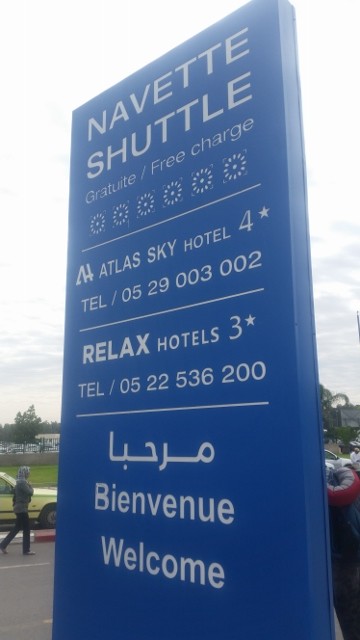 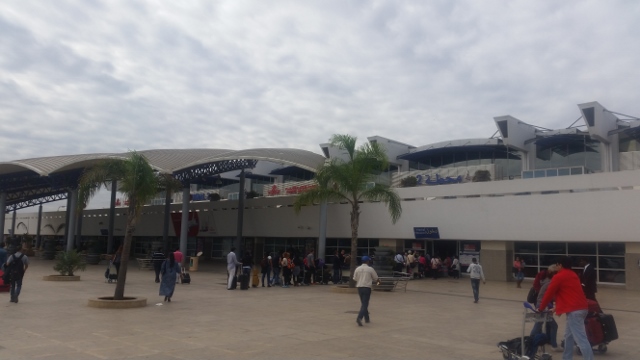 (This photo is taken on the next day – during daylight, to show where to find the shuttle)

After waiting for the shuttle for more than 40 minutes I was a bit uneasy. I tried calling the hotel, but no one picked up. I was contemplating taking a cab, but just then the shuttle arrived. I used this shuttle to come to the airport the next day, and again twice during my transit night at the end of the trip. Every other time the shuttle was on time. Perhaps on my first night, I may have missed a shuttle by few minutes and the subsequent shuttle must have been a few minutes delayed. Anyways, the shuttle took us to the hotel in 15 minutes. The checkin took 15 minutes and I was in my room.

The rooms at the hotel are basic. Not luxurious, but pretty clean. My room had a view of the pool and the garden. The bed was good and I had a nice good night sleep.

The only food options around the hotel is the hotel restaurant. Please do not expect good food. I tried eating there a couple of times, but the food was below par. The guest who was sitting next to me, left without even eating a bite. Quite disappointing actually. Anyways, I was hungry and it was late – I ate what I could and grabbed a cold beer to relax. 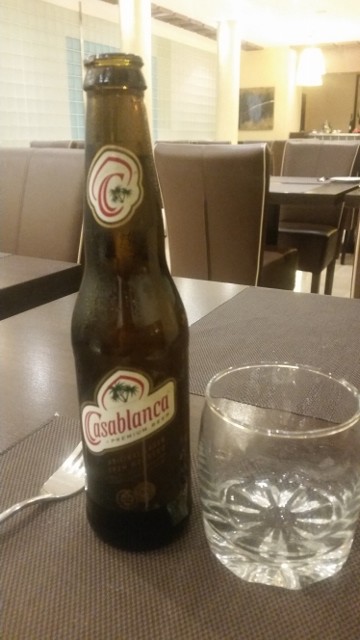 The hotel is nicely located, and pretty much the only option (along with its sister property) for transit usage. The rooms are basic but clean. The prices at the hotel restaurant are similar to airport establishments in western European, but the service was way below par. However, this is a transit hotel – for 1 night at the most! If that’s the case, it is fine. If you have more than a day in Casablanca, please head to the city.