Casablanca is a wonderful city, and I am glad I was there for a day. I would be bored, if I was visiting the city for a longer period. The main attractions can be covered within a day. I was there in October and the weather was perfect. Not too warm or cold, just perfect for walking around the city. I took the airport train from the airport and headed to the city. From there I walked around and enjoyed the city, and took the train back to the airport. Below, I will outline how to travel around Casa (as it is belovedly called) and what to do in the city.

While in Casa, I was staying at Relax Hotel close to the airport. My report about that hotel is here.
The reason I was in Casa, was due to a cheap Qatar Airways business/first class fare to USA. More details are here.

Casa Airport to the city center

Transport in Casa is quite well organized but the information available on the internet about this transport is not. The official city and transport website are quite useless as I found out, it is quite difficult to get the right information. Secondly, my favorite go to website when I travel (wikitravel) itself is quite outdated. I have found wikitravel quite well updated whenever I am on the road. Of course, there are few ups and downs, but in general it gives good information. However, during my trip to Casa, I found out that wikitravel was not properly updated. The website told me that from the airport, I can take the train only until Casa Voyageurs and from their to go to the old city I need to take a petit taxi. The problem was that most of the good hotels are concentrated around Casa Port. As I was arriving in the evening, I did not wanted to take a train to Casa Voyageurs and then deal with the taxi guys. Thus I decided to stay close to the airport.

However, if I had known that the airport train goes directly to Casa Port, I would have rather stayed in the city center. Anyways, next time I am in the city, I will know where to stay.

The train from the airport

It is a very comfortable and clean train. It leaves once per hour, I think around .10 (10 past) of every hour, from 6am to 10pm. However, please re-confirm these hours once you are in the city as they can change from time to time. The train station is within the airport, you just take an escalator to the train station, buy your ticket and you are ready to head to the city. The train ride from the airport to Casa Port is around 50 – 55 minutes. 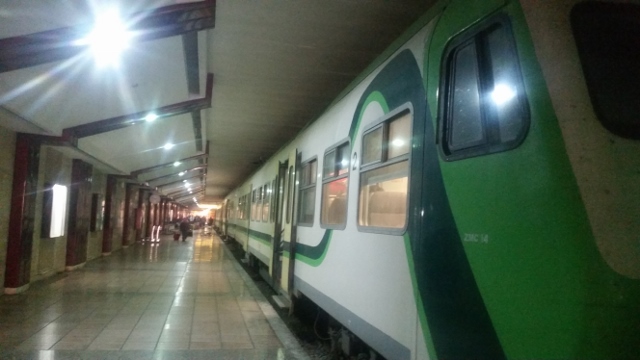 Train and the station at Casa Airport 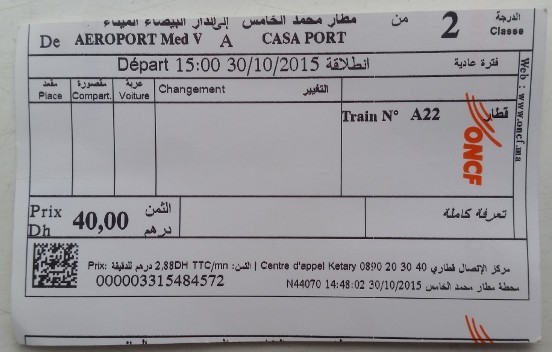 One-way ticket from the Airport to Casa Port – 40 dh

Train and the station at Casa Port

Walk around the city

I had a day to walk around the city. It is a nice, walkable city. Most of the places I could find pedestrian pathway to walk, but not everywhere. During my visit, I visited the following sites.

I mapped this all  on google, and such a walk should be around 6 km. Not to bad to do it in a day or half-day.

It is a beautiful, new, modern station, which is very close to the old city. The station is well lit and seems very safe. There are many food and shopping outlets within the station. Nice to place to start your tour, or end your tour with a nice relaxing drink. 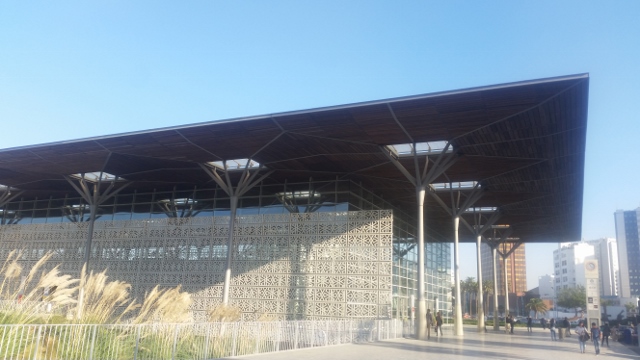 Beautiful promenade to walk along the Atlantic ocean. Nice view of the ocean. Can sit along the water on the stones and relax with the sounds of crashing waves. 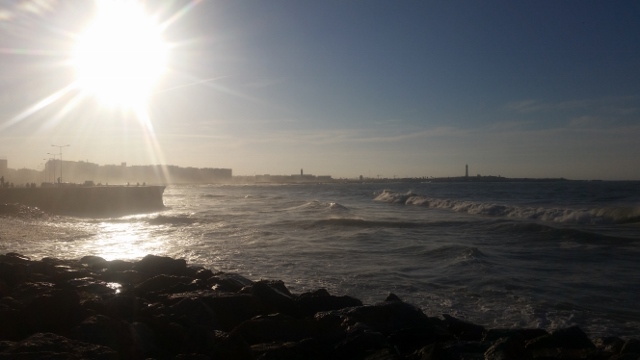 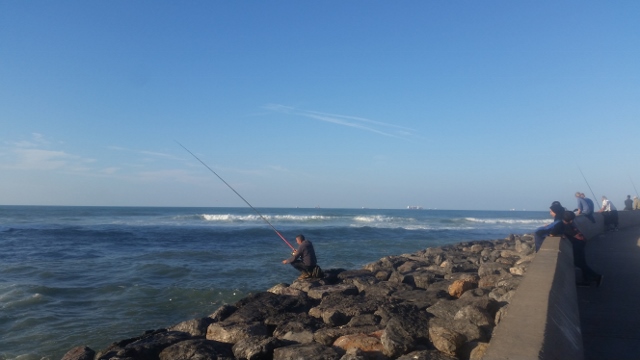 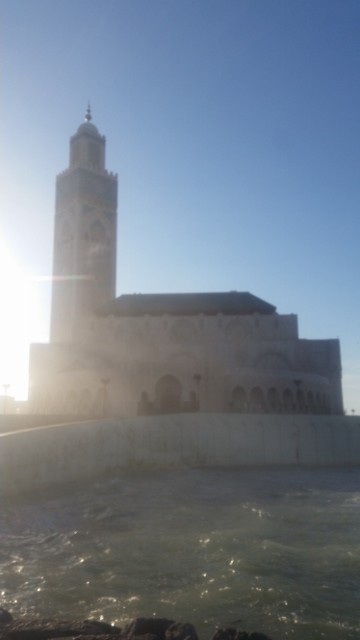 It is the largest Mosque in Morocco and the third largest in the world-also consisting of the tallest minaret in the world. Not just the architecture or the size of the mosque that is impressive, but I found its location very interesting too. It is placed right on the edge of the African continent and juts out a bit into the water. What a great place to see the sun-set. 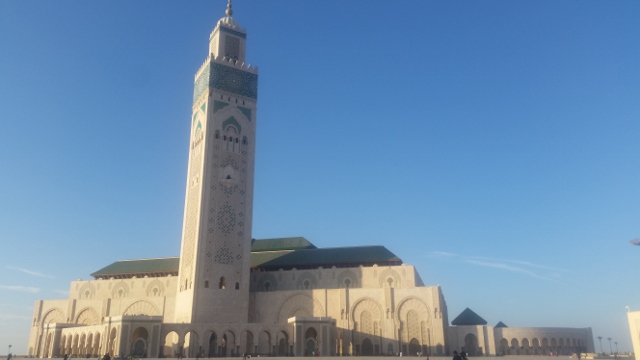 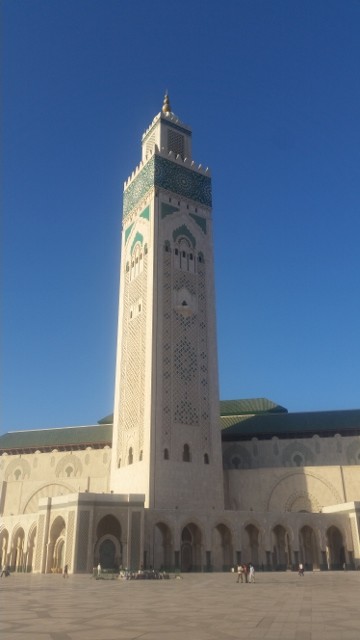 Old city south of the Mosque. Its a nice place to walk around the tiny narrow alleys and see how the people in the old city live. Reminded of CIDCO area of Nasik and New Mumbai in India. 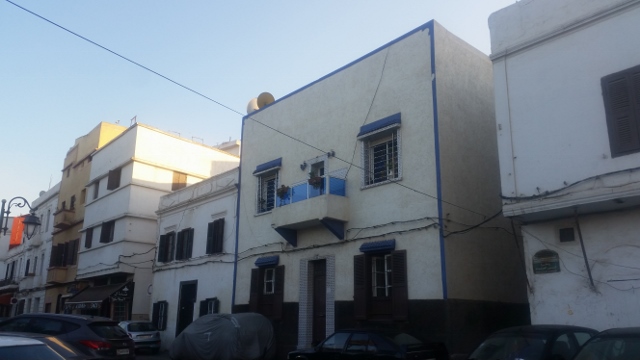 I wanted to eat at a Moroccon restaurant where a lot of locals eat. After walking around the city, I found this place (behind Station Place de Nation Unis) and next to Mcdonalds and KFC there. Quite a nice place. Friendly service and decent food. Most of the clientele there was local, and seems like a local joint rather than a tourist trap. Good alternative to the KFC and Mcdonalds, next door. They started the service with nice olives and bread and then the main course I ordered. I paid around 6-7 euros for a nice meal. 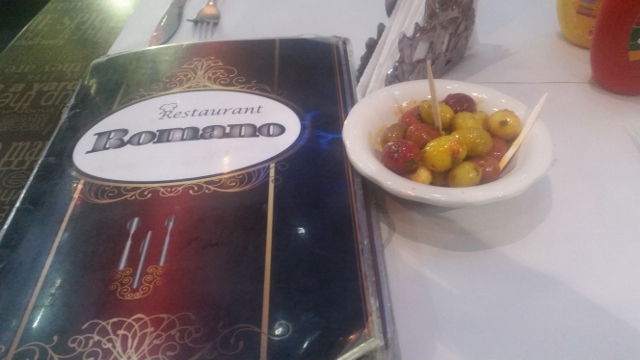 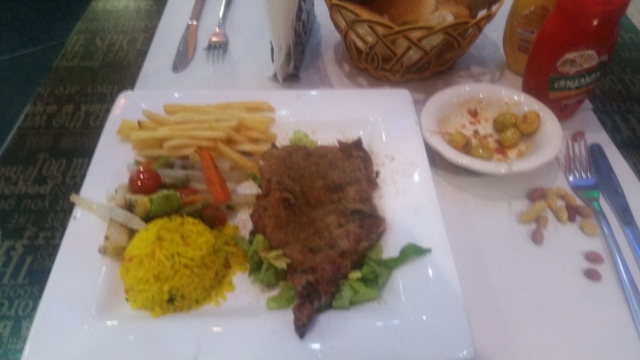 I was looking for some cheap souvenirs to take back for the family. I was not able to find anything at the Mosque or the Medina. And I was glad to find this shopping street. This is the street that connects Station Place de Nation Unis and Casa Port. Lot of options for souvenir shopping. Most of the shops were located around this tower. 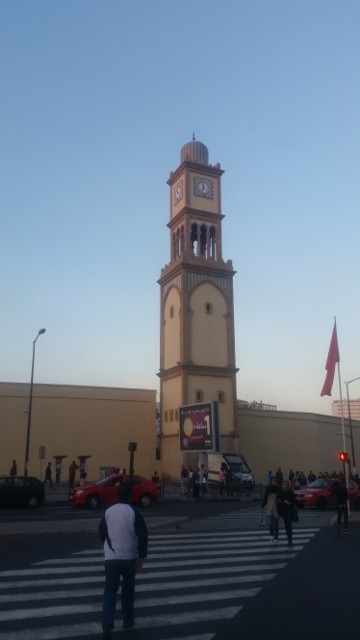 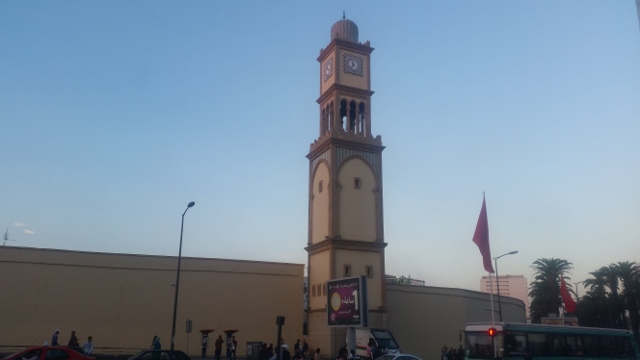 By the way, Indians need visa to visit Morocco. Morocco has an embassy in Delhi and an honorary consul in Mumbai. As per Indian food in Casa, my research shows that there are plenty of  Indian restaurants around the city. TripAdvisor ranks the top 5 and they are listed here http://www.tripadvisor.com/Restaurants-g293732-c24-Casablanca_Grand_Casablanca_Region.html

I liked the city, and had a nice short transit. I would like to return to Morocco one day and explore more of this country. I have heard great things about Marrakesh and Fez.