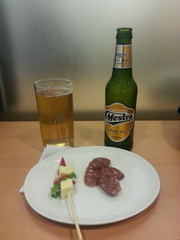 I went to the LAN lounge in SCL. It is a fantastic lounge. As it was a late night flight, I told the lounge reception that I would like to shower. The shower was readily available. It is a nice shower room, and the best part was that I received an LAN business class amenity kit to be used in the shower. It was a nice way to see what LAN offers in business class. After a nice shower I grabbed some snacks and a drink, and relaxed before the long flight back to DFW. 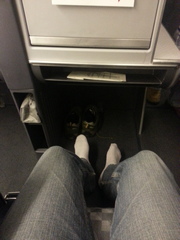 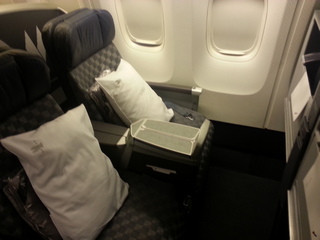 The boarding was quite organized, similar to my DFW experience on the way to Buenos Aires. First were the premium passengers and then economy. Once on board, the cabin looked cramped on the 767. The seats are smaller than the 777 ones, and there is no entertainment screens with the seat. There is no personal storage space available for the business class seats, everything has to be stowed away. 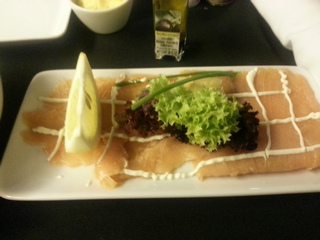 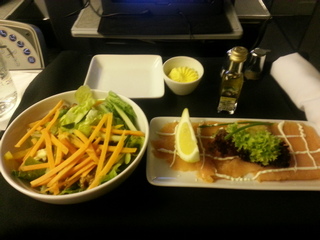 After take-off, as typical of AA the service started with a drink and warm nuts. I have to say the food was quite good on this flight. I ate well, and fortunately I was sitting next to an interesting seat companion and once we began to talk time went by pretty fast. I went to bed late and skipped the early morning breakfast as I wanted to catchup on my sleep. The seats on the 767 are not too great. They are not lie-flat, they slant at an angle and not comfortable for a long nights sleep. Anyways, I was able to grab a few hours of sleep before our landing in DFW.

AA 767 business class is quite an old product. I would not recommend it on an overnight flight. For a day flight it is ok, but for a night flight the bed is not the best to sleep on. Secondly, there is no entertainment screens, and the crew distributes tablets after take-off. However, the tablet do not have full fledged entertainment content, but somewhat limited movie selection. Overall its not the best business product out there. I was able to grab a few hours of sleep and was able to enjoy my flight due to a nice seat companion, but if not for that, it would have been a long boring flight.